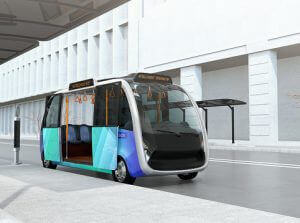 Self-driving buses may be the future of transportation, but on its first day of operations, an autonomous bus experienced an age-old problem: It got into an accident.

The bus accident, which happened in Las Vegas, raises questions about who is responsible when crashes occur that involve self-driving vehicles. Most motor vehicle accidents can be traced back to an error made by the driver. What if there is no driver? In the future, more and more self-driving vehicles may be on the road. If one of these autonomous vehicles causes a crash, who is liable? The owner of the car? The company that programmed the software to operate the vehicle?

These are questions that judges and juries may need to consider in the future. However, in the accident involving the self-driving shuttle bus in Las Vegas, human error was a factor. A semi-truck in an alley backed into the shuttle, according to a report in Wired. The self-driving bus did not back up to avoid the collision, because it detected a vehicle was behind it. The shuttle stayed in place and was struck by the slow-moving semi-truck.

The crash might have been avoided if the shuttle had honked its horn. But the vehicle did not sound any warning because the trailer of the truck moved in a manner that the bus did not anticipate, according to the Wired article, which cited a representative of Keolis, a transportation management company that launched the shuttle bus along with AAA and French manufacturer Navya. Media reports state that no one was injured in the accident. The truck driver was ticketed, according to reports, and the shuttle sustained minor damage and then resumed service a day later.

The accident illustrates the problems that can occur when robot-driven vehicles share the road with human-driven vehicles. Human drivers can make unpredictable, illogical decisions. Robots respond only as they are programmed to respond.

According to a Reuters report, the U.S. National Transportation Safety Board sent officials to Las Vegas to investigate. The federal agency is charged with determining causes of accidents and has the power to issue safety recommendations. The report states that the NTSB wants to find out how autonomous vehicles interact with their environment and the vehicles surrounding them that are driven by humans.

According to Reuters, a reporter who was on the shuttle at the time of the crash said the self-driving vehicle responded the way it was programmed to respond. However, the reporter thought a human driver likely would have put the shuttle in reverse and found a way to avoid the collision – or the human would have blasted the horn.

In the Las Vegas autonomous shuttle accident, the semi-truck driver was at fault. The driver’s employer will likely be held liable.

However, in a different situation, the question of liability could be harder to determine. Victims may be best served by a knowledgeable personal injury attorney who can protect their rights.

If you or a loved one was involved in any type of motor vehicle accident, contact an experienced Las Vegas attorney. Call Lasso Injury Law at 702-625-8777 or fill out our online contact form to find out how we can help you.