Home >> Blog >> Pedestrian Accidents on the Rise In Las Vegas

Pedestrian Accidents on the Rise In Las Vegas 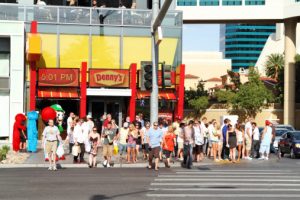 The Nevada Department of Public Safety announced this year that the efforts made by that agency and others had contributed to a drop in the total number of fatalities on Nevada roads in 2017. The state had 24 fewer traffic deaths than the year before, a welcome shift that came even while the population of the state was increasing.

The drop was not universal among all kinds of accidents, however. The number of pedestrian accidents continued to rise in Nevada, especially in Las Vegas.

In fact, 78 of the pedestrian deaths last year came just from our county. The Las Vegas police department directly investigated 65 of those deaths. As another news report from KTNV 13 Action News noted this past August, Clark County has already recorded 37 pedestrian fatalities so far this year.

The number of pedestrian fatalities stands in stark contrast to the general traffic trends. So what’s the solution to solving this problem? Zero Fatalities Nevada has a page devoted to this very concern, focusing largely on the fact that most pedestrian accidents are entirely preventable. Most tips for drivers can be summarized very simply: know the laws concerning pedestrians, and keep an eye out for them at all times.

One of the most important things to remember in pedestrian safety is that each of the 100 lives lost last year was more than a number. These are human lives, with as much value and right to be using our roadways as the drivers who struck them. Taking these lives seriously, and recognizing their right to walk in safety, can go a long way in ensuring that drivers will take the proper precautions to prevent further death.

If you have been the victim of a pedestrian accident in Nevada, contact us today to learn more about all your legal options. We’ll fight to hold negligent drivers accountable for their actions.