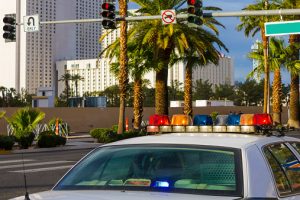 A man was injured on the Las Vegas Strip after a police officer’s weapon discharged one round, according to a report in the Las Vegas Journal-Review. The news story raises questions about whether the police can be held liable in cases of “negligent discharge” of a weapon that causes injury to a bystander.

The incident occurred around 1:20 a.m. on Jan. 1, after thousands of New Year’s Eve revelers had left the area. With an assault rifle strapped to his body, an officer was moving barricades when “gear … got into the trigger and made it go off,” a Metropolitan Police Department spokesman told the Journal-Review.

It’s not clear whether the man was struck by the bullet or debris. However, the bullet hit the ground first. The man sustained an injury to his calf and chose not to seek medical treatment. According to the report, two others suspected they were hit by something, but they did not show any signs of an injury.

The police spokesman characterized the shooting incident as a “negligent discharge,” saying the case is under internal investigation. The officer may be disciplined, depending on the results of the investigation.

According to the news report, police officers undergo firearms training every three months. The department determines the focus of each training based on what it believes needs to be addressed.

Officers should not have a round in their weapon if they are guarding a crowd and do not intend to use the weapon, according to the report.

Could the officer or the Metropolitan Police Department be held liable?

Fortunately, no one in the Jan. 1 shooting was killed. The incident could have turned tragic if the negligent discharge occurred an hour earlier, when the Strip was jammed with people celebrating the New Year.

An injury from a shooting is always frightening and can have a long-term impact. But does an injured bystander have a right to file a claim against the Las Vegas Metropolitan Police Department?

If you are injured by a private citizen who used a weapon carelessly or recklessly, you may have grounds to file a personal injury lawsuit to seek damages.

Most states, however, shield government workers, including police officers, from liability lawsuits if they accidentally cause harm to someone in the performance of their duties. The agencies they work for also are protected from lawsuits under what is known as “sovereign immunity.”

But Nevada does allow people injured by police officers, or other government agents, to work around the sovereign immunity concept and file a claim for compensation in certain cases. Lawmakers created Chapter 41 – Tort Claims Against the State, Its Agencies and Political Subdivisions, which explains the claims process.

The injured person must file a written and signed claim with details of the incident. You can visit the Nevada Department of Risk Management’s website to find the tort claim form.

The process can be time-consuming and complicated, and there are strict deadlines and legal requirements to be met. This is why it’s important to talk to a personal injury attorney instead of trying to file your claim on your own.

If you or a loved one was injured as a result of a police officer’s negligent actions, you may be entitled to compensation. Call Lasso Injury Law at 702-625-8777 or fill out our online contact form to find out how we can help you.