Las Vegas Children Can Be Injured on Playgrounds and Swing Sets 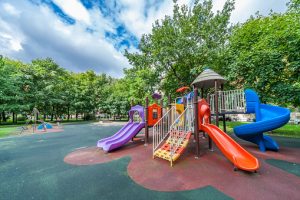 Children face many dangers in the world around them. Some of those hazards - like car accidents - are easy to identify. Luckily, we address them with safety measures, such as car seats and safer vehicles.

Other perils are less obvious. Playgrounds are a perfect example. These are popular locations for children to meet and play. They also contain many hidden dangers.

When child injuries occur on playgrounds, there are typically two types of legal claims that could be made:

The Statistics on Playground Injuries

The Centers for Disease Control and Prevention reports that approximately 45 percent of all playground injuries are severe (resulting in a fracture, internal injury, concussion, dislocation, or amputation). Between 1990 and 2000, 147 children under the age of fifteen died from injuries sustained on playgrounds. Roughly 56 percent of these deaths were caused by strangulation while 20% were caused by a fall. In 1995 alone, the economic cost of playground injuries to children aged fourteen and younger was $1.2 billion.

While these statistics can be scary to parents, there is also good news in the research. The CDC has also identified specific risk factors for playground injuries. On public playgrounds, more accidents occur on climbers than on any other playground equipment, whereas swings cause most injuries on home playgrounds. And one study in New York City found that playgrounds in low income areas had more maintenance issues - and related injury risks - than those in high income neighborhoods. These issues included trash, rusty play equipment, and damaged fall surfaces. Parents can use these findings to identify and avoid playground risks before their children are injured.

Who is Legally Responsible for Compensating a Child’s Playground Injuries?

There are many ways in which a person or company can contribute to a child’s playground accident. For example: if a swing was negligently designed or manufactured, and a child was injured while using it, the manufacturer would be obligated to compensate the victim under the legal doctrine of products liability. If a city or school fails to properly maintain playground equipment in a condition that is safe for children, it may be subject to premises liability for causing resulting injuries. If a child was injured on a residential playground (in a subdivision, condo community, or residential lot), the Homeowner Association (HOA) can be held responsible for failure to maintain and/or inspect the equipment.

Once an individual, company, municipality, or school district has been found liable for causing a child’s playground injuries, it is legally obligated to compensate the child's financial losses. This can include medical bills, pain and suffering, rehabilitative therapies, projected future medical expenses, and any other expense which is directly attributable to the accident. For example: most adult injury victims receive an award for lost wages to compensate the time they missed from work as a result of the accident. Children have no such easy method for calculating the value of missed school. But if a tutor had to be hired or other educational expenses were incurred to keep the child on pace with classmates, these costs could be recovered from the party whose negligence caused the child’s playground injury.

Contact an experienced Las Vegas personal injury attorney after any playground accident. He or she will protect your child’s right to be compensated for injuries and financial losses.