How Safe is Las Vegas for Bicyclists? A Personal Injury Lawyer Explains 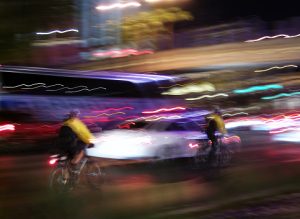 Many residents and visitors of Las Vegas prefer to get around by bicycle. For some residents, a bicycle may be their only way to get around.

In 2016, approximately 10.5 percent of Las Vegas households didn’t own any vehicles. Just a year earlier, the city ranked No. 3 in the nation for being the most dangerous for bicyclists – following Tucson, Arizona and Albuquerque, New Mexico. On average, the city had a bicyclist fatality rate of 6.4 per million people.

With the high vehicle traffic rate around the strip, sharing the road with cars and trucks can be dangerous for bicyclists. In some areas, the infrastructure isn’t bicycle-friendly. Additionally, some drivers either fail to see bicyclists or find their presence to be an inconvenience.

Even designated lanes can be dangerous for bicyclists. Drivers can be distracted, impaired by alcohol or drugs, driving recklessly, driving drowsy, or fleeing law enforcement.

In one recent incident, a bicyclist was killed in a hit-and-run accident near the Strip. That driver of a minivan was previously involved in a vehicular crash near Flamingo Road and Las Vegas Boulevard.

The driver fled the scene of that crash and ended up hitting and killing a bicyclist who was riding in a hybrid bus-bike lane. The bicyclist died at the scene of the crash. The driver of the minivan fled a second time before being caught by the cops hours later.

Injured in a bicycle accident? Here’s what you need to know.

Even when bicyclists wear helmets, they are at risk of suffering serious or life-threatening injuries. When bicyclists survive accidents with motor vehicles, they may sustain:

If you have been injured in a bicycle accident, proceeding with a personal injury claim won’t be easy. Dealing with insurance companies can be frustrating. They don’t have your well-being in mind, and they’ll do whatever they can to make your claim disappear.

That’s why you need an experienced Las Vegas personal injury lawyer in your corner who knows how to take on insurance companies and recover the compensation you deserve.

Contact us today to review the details of your claim and discuss your legal options.