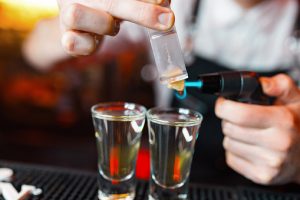 Some patrons of bars today are only interested in a simple beer or shot of liquor, but others seek new and exciting blended drinks that will provide a unique taste experience.

One way to make a drink interesting has proven to be fire; a controlled blend of highly flammable liquors, exposed to flame for a brief period, can add a flair to the evening that cannot be easily matched. But fire is always a hazard, especially when given to people with impaired judgment, and injuries are now occurring around the world.

The dangers of flaming drinks are addressed in a paper provided by the National Institutes on Health and originally written for the Journal of the Euro-Mediterranean Council for Burns and Fire Disasters. As a European publication, the article focused on results gathered in Turin, Italy, but the problems addressed are universal.

The researchers identified a higher risk of burn injuries on weekends, especially in the summer. They also noted that the way a flaming drink is served may contribute to the odds of injury. Drinks that are shaken rather than mixed have a higher chance of igniting explosively, and adding liquor to a flaming drink may allow the fire to move up the stream of alcohol to the bottle.

Five burn injuries related to club activities were identified in Turin from 2009 to 2013. Of these, four were related to flaming drinks. Three of the drink-related burn injuries required hospitalization and assisted ventilation, and two of those three required surgery.

This is not a problem exclusive to Italy and points abroad. Just last month, two individuals were burned by a flaming cocktail at Gordon Ramsay’s Hell’s Kitchen in Caesars Palace. The $14 drink, called a Rum Donkey and available in clubs worldwide, was removed from the local menu as a safety measure after the incident. Both victims were taken to the hospital, but the severity of their injuries had not been made public at the time of news publication.

Clubs and bars have a responsibility to keep their patrons safe. Any alcohol consumption affects the brain in ways that can limit response time and consideration of danger, and those who are serving alcohol must be considerate of how their drinks will impact people. Flaming drinks, or any uses of fire in an environment where alcohol is served, pose special dangers that require very careful practice and supervision. When a night out turns into a hospital visit for burn injuries, victims deserve justice. Contact us today to learn how we can help.