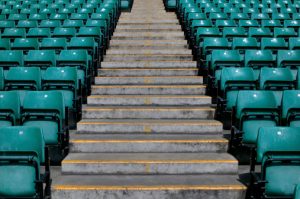 T-Mobile Arena celebrates the second anniversary of its opening this month. While many have enjoyed the entertainment available in that time, there are rising concerns about the safety of the upper seating decks.

Part of a recent architectural shift that has occurred all over the nation, the cheapest seats at T-Mobile are built at a steeper angle than older arenas in Las Vegas. This is done with attendee views in mind – the higher angle of the seats means that each attendee has a more direct and clear view of the action on the ground. But these seats may be sacrificing safety for that better view.

KTNV reported earlier this year on concerns about the arena when a patron was removed by emergency services after falling and hitting his head on the stairs of the upper level. While MGM Resorts, which owns the arena, expressed its concern and promised that “the safety of and comfort of our fans is of the utmost importance to our staff,” Christopher Ling, a forensic architect, warned Inside Edition that steep angles create problems.

Because the angle puts the back of each seat much lower, it is harder for seats to help patrons maintain balance, and Ling stated that “once it goes below the knee and closer to the ankle, then it becomes a tripping hazard.”

Inside Edition was covering the broader nationwide trend of steep seats. This includes the Golden 1 Center in Sacramento, California, where fans were injured by other people falling on them during Paul McCartney shows two nights in a row. One attendee, Todrick Harter, had to leave the arena in a wheelchair after the first of those incidents.

The steepest angles, however, currently belong to Barclays Center in New York, which hosts the Brooklyn Nets (NBA), New York Islanders (NHL), and a variety of concerts. The center defends their 36-degree seats with the claim that “Barclays Center has been widely recognized as one of the best designed venues in the world” and goes on to claim that steep angles are growing incredibly common among NBA stadiums.

While both Barclays and Golden 1 Centers noted that they meet legal requirements and pass inspections, the fact is that people sustain injuries at both sites and arenas like them, including our own T-Mobile Arena. When injuries are a direct result of the arena’s design, the operator must own their responsibility for those injuries. If you have been injured due to a trip, slip or fall, contact Lasso Injury Law LLC today so we can help you get back up.