Despite Crackdowns Drunk Driving Still a Threat to Public Safety 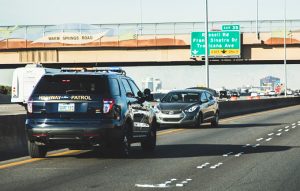 In a recent incident reported by 13 Action News, one person was killed, and two others injured, while waiting for an RTC bus near Sahara Avenue and Nellis Boulevard. The three individuals were struck by a suspected drunk driver who reportedly drove onto the curb.

The RTC stop at Sahara and Nellis was set behind the sidewalk and covered by a canopy, according to 13 Action News. In fact, many RTC stops were moved about five feet beyond the curb in order to widen the barrier behind vehicle traffic and pedestrians.

This accident marked the 18th Las Vegas traffic fatality to be investigated by police in 2019.

Prior to this devastating crash, law enforcement officers in Las Vegas and in other parts of Nevada began cracking down on impaired driving. Between October 2018 and February 2019, more than 400 suspected impaired drivers were arrested.

In another effort to curb drunk driving, the Las Vegas Metropolitan police and Nevada Highway Patrol set up a DUI sting operation just ahead of Saint Patrick’s Day. FOX5 reports that the operation was executed on a Thursday night, a time officers have noticed an increase in drunk driving.

State lawmakers are pushing for harsher penalties for drunk drivers. Sandy Heverly has proposed senate bill 297 to crack down on repeat DUI offenders.

“We have thousands of DUI arrests in the state of Nevada and generally speaking, 30 percent of those are repeat offenders,” she said.

Despite crackdowns by law enforcement and harsher penalties proposed by lawmakers, many drunk drivers will continue to go under the radar. Police can’t be everywhere to stop drunk drivers all the time. When a driver gets away with operating a vehicle while under the influence of alcohol, lives are put at stake. In fact, nearly half of all fatal traffic accidents across Las Vegas Valley involve impaired drivers, according to FOX5.

Should you or a loved one be injured in a crash with a drunk driver, it’s critical that your rights are upheld. At Lasso Injury Law LLC, we have seen how devastating DUI-related accidents can be to victims and their families. Our experienced and compassionate legal team will work tirelessly in the pursuit of justice. Contact us today to find out how we can help you.