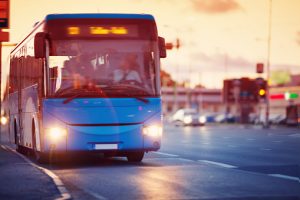 The attractions and amenities along the Vegas Strip draw people from all over the United States and the world. Many visitors to Las Vegas don't get around in their own cars. This means a great deal of foot traffic, and visitors taking buses to tour the city and to get from point A to point B.

Buses, in particular, pose a significant risk to Las Vegas pedestrians. They are everywhere around the city.

Bus crashes are more serious than you might think

On average, buses weigh somewhere between 20,000 and 40,000 lbs. — depending on the number of passengers they carry. This makes it difficult for them to stop in the event of an imminent collision.

Crashes involving buses may not happen at the same rate as those involving cars or commercial trucks, but they can still be devastating.

According to the Federal Motor Carrier Safety Administration, there were approximately 274 fatalities caused by bus crashes — with transit buses accounting for 104 deaths. An estimated 25,000 people were injured in bus crashes.

According to the Las Vegas Review-Journal, nine people were hospitalized after a crash involving three cars and an RTC bus back in June. The crash occurred at the intersection of Lake Mead Boulevard and Tonopah Drive.

The Las Vegas Review-Journal also reported that two pedestrians were seriously injured after being hit by a bus while walking on the Strip last month.

At around 6:30 a.m., two pedestrians were crossing Las Vegas Boulevard in a marked crosswalk but they didn't have a green light to cross. They were then hit by a tour bus headed south, according to police. They were believed to be intoxicated at the time of the incident.

Crashes involving large buses are preventable when everyone acts responsibly. This means staying attentive and complying with all traffic rules. If you or a loved one were injured in a bus crash — as a pedestrian, passenger, or other vehicle occupant — speak to an experienced Las Vegas personal injury lawyer as soon as possible.

Injuries sustained in a bus crash can be serious enough to require months of medical care and physical therapy. What worse, you may not be able to go to work and collect a paycheck during your recovery. You may be wondering how you will be able to pay your medical bills and make ends meet. That's where attorney Al Lasso and his highly-skilled legal team comes in. We are dedicated to helping injured motorists, pedestrians, and passengers maximize their compensation.